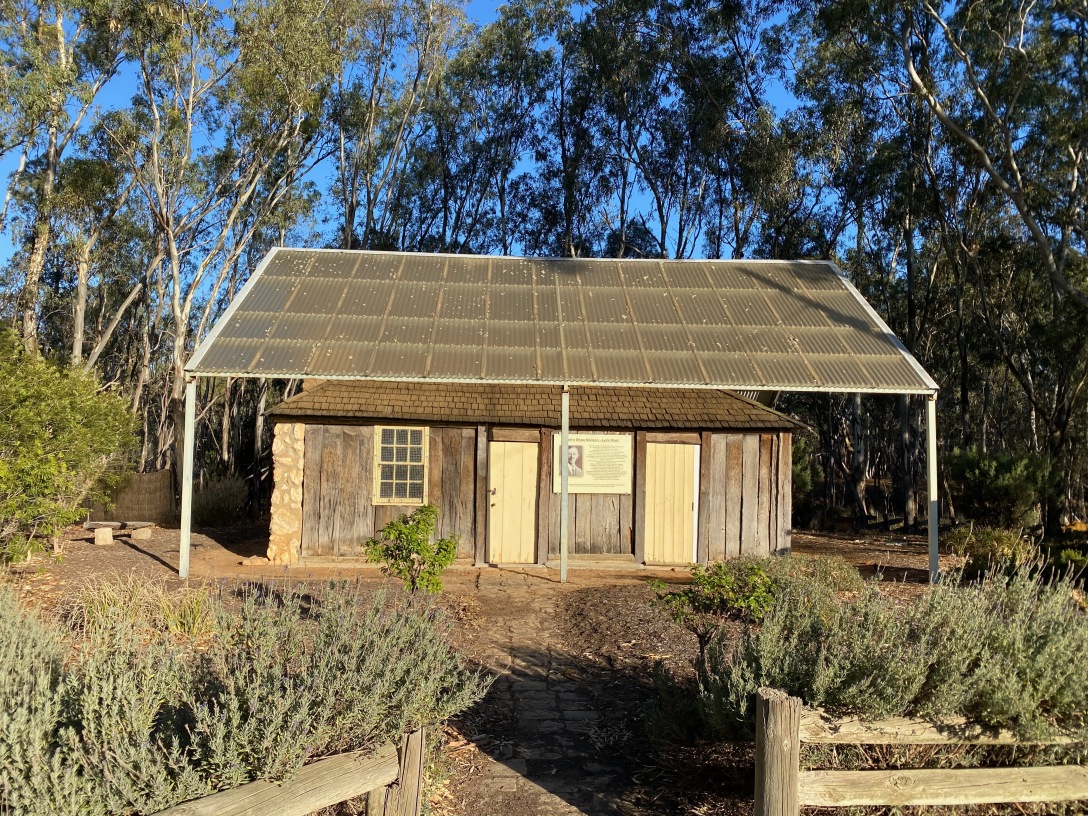 Last week, on a lightning trip to Nhill by train and bus, I had the privilege of visiting the poet John Shaw Neilson’s cottage, which was moved from Penola in 1961 and opened in 1972. I have long been fascinated by heritage buildings that have been relocated. In fact it is a surprisingly common practice in Australia – houses associated with Joseph Furphy, Adam Lindsay Gordon and Banjo Paterson have all been shifted (not to mention Captain Cook’s cottage – the weirdest folly of them all!)

When a building is taken to a new place, it is necessarily re-framed and re-contextualised in different ways. Stephen F. Mills asks: ‘Can buildings in their new locations ever retain any of the nuances of time and place, which were embedded in situ?’ Obviously it should be a last resort, but I think it’s better that special buildings are moved than destroyed.

In 1961, President John Meagher and members of the recently formed Nhill and District Historical Society dismantled Neilson’s birthplace cottage, numbered all the parts and moved them to safe storage in Nhill (on somebody’s property I was told). It took over ten years for the ‘restoration’ to be completed, maybe because the townspeople were busy with another Neilson memorial at the same time?

When I approached the cottage a few days ago, I was surprised to see the shelter over the top, designed to protect the delicate roof made of hand cut wooden tiles. After the door to the cottage was unlocked, I walked into the gloomy space and immediately registered how dirty it was. There was a pile of detritus on the dirt floor where a person from the council had hurriedly swept with whatever came to hand. Apparently he had chased away a redback spider earlier – and I spotted a mouse running up the wall. I assume that Shaw Neilson’s mother Margaret would never have allowed the place to fall into such a state when they were living there (in Racecourse Road, Penola)

To the left is a hearth with tins on the mantlepiece with cooking implements, and to the right is a rack with a number of tools and bits and pieces hanging up (I noticed that these were festooned with cobwebs) above a Coolgardie safe. A wash board in a metal tub stands near the door, representing the toil of the women of the house. In the bedroom, the bed was covered in dirt and the white bedspread with plastic cover that used to be there, was gone.  There was a small desk with chair, representing the writer’s practice though he never would have written in this particular building, having been too young.

All of these things are approximations of the items which may have been in the house originally, along with books if they could afford them. The mean-ness and poverty of the cottage was most striking for me, particularly the dirt floor. The surviving cottage is only part of the full building, as some of it remained in Penola, probably due to the constraints of transportation. Even so, it’s hard to fathom how a large family could possibly fit inside.

There’s another, earlier memorial to Neilson in Nhill which was put up with assistance of the Historical Society, Apex and Rotary in 1964. Inside the memorial is a time capsule – a copy of the Nhill Free Press – a full set of coin currency, a copy of Shaw Neilson’s works, a book by historianLes Blake, a copy of the plans of the memorial, a copy of a popular American magazine showing the technological advances of the age (including jet aircraft and helicopters!). ‘If for some reason in the far distant future, this memorial has to be demolished, the people will get a good laugh, no doubt, at what we have preserved for their interest’ Ken Robb, then President of the Nhill and District Historical Society said.

Shaw Neilson spent much of his life in tents, in navvy camps and in cheap boarding houses while working at casual jobs all over Victoria (and in parts of New South Wales) for an estimated total of 200 jobs in thirty years. It wasn’t until he lived in Gordon St Footscray (‘Stony Town’) that he had stable accommodation at last. Given that he was essentially itinerant and homeless for much of his life, it’s significant that a house has been preserved to represent his legacy. Because he didn’t marry and have his own family, he is more closely associated with one of the houses that his family inhabited in passing.

Aleida Assmann distinguishes between ‘places that are in themselves carriers of meaning’ because for example, something happened there and places ‘that have acquired meaning through processes of symbolisation’. This occurs when a monument is set up to commemorate or represent something that happened elsewhere. This is interesting in relation to the Neilson cottage – Penola is the actual birthplace but Nhill hosts the building where he was born, which scrambles the symbolisation, implying that he was born in Nhill (visitors may assume this unless they look more closely). He did live in Nhill however – and it was a resonant site for the family – even though it was only one home of many for this peripatetic poet.

a basket of writing from author Kathy Jetnil-Kijiner

We came through the Gate of the Crossing in a year that is not remembered and will never be forgotten . . .

Melbourne Circle: stories from the suburbs

new words, images and shared stories from our crowded solitude

Books, reading and anything else that comes to mind...with an Australian focus...on Ngunnawal Country

Time Travellers in Essendon, Flemington and the Keilor Plains

For lovers of Australian and New Zealand literary fiction; Ambassador for Australian literature

Nathan Hobby, a biographer in Perth

The life of Katharine Susannah Prichard, the art of biography, and other things

Thoughts about new and old books